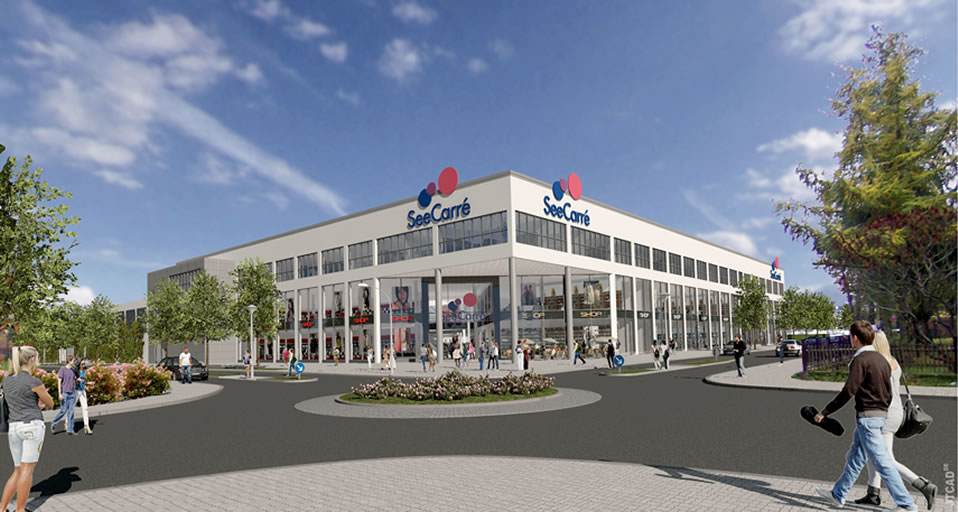 The Frankfurt project developer S&G Development GmbH has introduced its plan to erect a shopping centre in Berlin-Falkensee. The inner-city SeeCarré centre offers round 22,000 square meters selling space (including adjacent areas) for some 60 shops in the immediate vicinity of the train station at Dallgower-Straße. In addition there will be about 2,000 square meters office space as well as a car park with round 570 parking spaces over two levels. Construction is planned to commence in Falkensee in spring 2015. After an 18-month construction period the opening of the centre could take place in October 2016.

The centre was designed by the Braunschweig architects office, Vahjen, and was erected with ultra-modern building technology as a green building with DGNB certification. The Managing Director of S&G Development GmbH mentions the target sector mix to include fashion, lifestyle, entertainment electronics, health and beauty and the organic food market as well as a food court.

“The Falkensee location offers an above-average purchasing power level of 103.3 (GfK Geomarketing) and as an up-coming Berlin commuter residential area exhibits a positive population development,” explained Alexander Folz, Managing Partner of the Leipzig ARCADIA Investment GmbH who was commissioned with the marketing of SeeCarré. According to Mr Folz the expected population growth between 2010 and 2020 will be approximately 5.6 % or about 7,500 people. Already today the retail trade in Falkensee annually generates round 150 million euro – with the focus on the inner city retail trade. A team of the global commercial law firm Dentos, under the leadership of the lawyer Jan Hellner, are responsible for the building- and lease contract law side of the project.