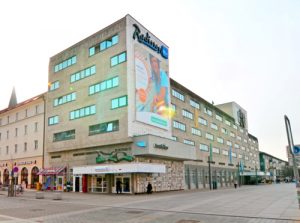 The Hamburg Achim Griese Treuhandgesellschaft mbH and the Leipzig ARCADIA Investment GmbH have acquired the Radison Blu Hotel on 1 Treptower Straße in Neubrandenburg from the “Hotel Vier Tore Neubrandenburg Grundstücksgesellschaft mbH” in Cologne. The hotel stands on an approximately 7,000 square meter property. As part of the planned project development, a modern neighbourhood development with a total rental area of round 21,000 square meters will be created with more than 8,000 square meters of retail space. The calculated investment volume lies at more than 30 million euro. The purchase agreement for the property was brokered by the Düsseldorf brokerage company, Reum & Schwarze.

Numerous building segments are currently planned in the central market square location: The southern part of the property presently used as a car park, which is internationally know as a concert hall, will be resealed in consultation with the city of Neubrandenburg. The participants are all in agreement regarding the transformation of the current hotel into a modern concept for the Neubrandenburg inner city. Upmarket retail spaces, which are geared towards the current area demands for national and international retailers, will be erected on the highly- frequented market square. More than 100 meters of display window frontages will be available to the retail trade at this top prime location. The concept and the building lease are currently being processed in close collaboration with the city of Neubrandenburg.

What is more, Alexander Folz, Managing Partner of ARCADIA Investment GmbH, is equally confident about the success of the project as his Hamburg project partner Ulf Wachholtz, Managing Director of Achim Griese Treuhandgesellschaft mbH. “Neubrandenburg,” said the Leipzig-born Folz, “is a completely underestimated regional centre in the area.” The Neubrandenburg regional centre, in addition to a stable population development according to the GfK, also boasts a very high centrality of 140. The purchasing power is also notably higher than Leipzig or Dresden, for instance. The city has approximately 70,000 inhabitants but, according to a survey done by the universities of Görlitz and Greifswald, benefits primarily from a generous catchment area of around 350,000 people in a perimeter of only 30 minutes drive time. The actual reach of the city is however way beyond the 30 minute driving perimeter.

Furthermore Mr Folz, retail expert, continued that due to the historic structure of the city there are not enough large and modern spaces in the inner city as required by the retail trade. This can now be changed by the planned project development and – in doing so – attract retail concepts to Neubrandenburg which will notably improve the retail offer. ARCADIA and Achim Griese Treuhandgesellschaft mbH have already planned many projects with similar development set-ups whereby Neubrandenburg is the first of these to be implemented.

Achim Griese Treuhandgesellschaft mbH is an owner-managed property developer, which has implemented more than 140 real estate projects with a total volume of over 2.1 billion euro since 1982. More than 100 of these projects were placed at the classic institutional investors, most of which took over numerous projects in succession. In doing so the focus was placed on retail property, however also residential, mixed-use and special use properties fall within the repertoire of the Hamburg developer. Particularly in the eastern part of Germany, Achim Griese Treuhandgesellschaft mbH has successfully implemented many projects.

ARCADIA Investment Group has focused its specialisation on the development of property used for retail and residential properties as well as car parks and underground car parks throughout the entire Germany. In addition to activities relating to its own portfolio, it has also implemented a host of projects in the framework of joint ventures – amongst others in close collaboration with international companies. One of the company’s core business functions is the optimisation, maintenance and expansion of the property portfolio of family businesses with the utmost care and confidentiality.