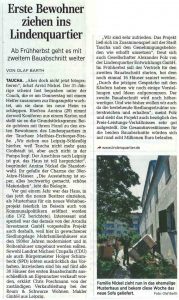 „Don’t take photos yet”, groaned Arvid Nickel. The 31-year old seems to have almost been buried underneath the couch that he struggled through the entrance door with the assistance of a helper to then drag it into his new home. His wife, Annina (29) in the meantime takes conifers out of a cardboard box and places them on the property boundary. With their dog, they both belong to the first residents of Lindenquartier in Taucha in Matthias-Erzberger-Straße. “We are moving here from Leipzig-Schleußig as Taucha is no longer such a large city but also isn’t right out in the sticks either. The connection to Leipzig is good and the house is wonderfully furnished” Annina Nickel justifies the choice of location. She likes the charm of the 1930s houses. “The furnishings are super, good quality labour and beautiful materials”, praised the biologist.

More than a year ago the house that now accommodates the new owners was ceremoniously opened, also in the presence of municipal politicians (LVZ reported) as a show house for a new residential building project. What made the project, introduced by ARCADIA Investment GmbH, so special and interesting was the fact that the already established residential area with apartment blocks from the 1930s was to be modernised and rebuilt into terraced houses. Both the district administrator Michael Czupalla (CDU) and the mayor Holger Schirmbeck (SPD) explicitly praised the project. In the meantime all 30 houses of the first building phase bar 5 have been sold exclusively to owner-occupiers, explained Chris Poschmann of the responsible sales management team at Reum & Schwartz Wohnen Makler GmbH in Leipzig.

“We are very pleased. The project was implemented as hoped with the cooperation of the city of Taucha and the approval authorities”, said a happy Alexander Folz, partner of the Lindenquartier Entwicklungs GmbH. The second building phase will start in early autumn where a further 16 houses will be refurbished. “The current talks with buyers have given us more perceptions and ideas. The second building phase will be even more high-end. And as we have done to date, we would like to emphasise and retain the existing residential structure”, Mr Folz reckoned and also believes the project to be well-constructed, also as regards the price-performance ratio. The total investment for both building phases will amount to approximately 8 million euro.

www.lindenquartier.de
The Nickel family are now moving into the former show house. Their new sofa was delivered this week.
Photo: Olaf Barth
Source: LVZ, Edition no. 165 of 18/19 July 2015