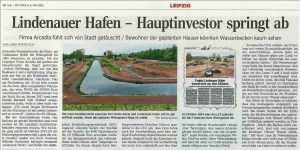 This is bad news for plans to erect a residential area for 1,000 people at Lindenauer Hafen. The Leipzig company ARCADIA withdrew as the main investor yesterday. “Our explanation for withdrawing from building lots 3 and 4 has just been sent per fax to all participants”, ARCADIA’s Managing Partner, Alexander Folz, advised this afternoon. It is a real shame considering the two years of wasted planning which cost between 70,000 and 100,000 euro. However, he will not pursue compensation from the city which put around two hectares of construction property for sale on a tender in 2013. “For a legal battle with the municipality my lifetime is far too valuable”, believes the 38 year old.

In the tender bid four building lots were awarded to private investors and a further two were given to the Leipzig Selbstnutzer initiative. As reported in October 2014 the first investor, Wohnungsgesellschaft Lipsia, again jumped ship. Wilhelm Grewatsch, who is on their board, complained that the city’s development company LESG was using “unfair tricks”. At the same time the conflict with ARCADIA was already smouldering – ARCADIA wanted to acquire 6,500 square meters at the entrance area of the harbour basin for 1.6 million euro in order to erect houses with basement garages. In January the mayor responsible for building works, Dorothee Dubrau (no party), conceded to the LVZ that, since the tender bid two years ago, not a single purchase contract could be concluded. For this reason, the municipality set a new timetable for the marketing of the six building lots and postponed the commencement of a further building phase. “The timetable set by my predecessor was way too ambitious”, Ms. Dubrau said last week. Five to six years for the marketing of such a large project on a brand new property is standard. ARCADIA boss, Mr Folz, explained the failure due to an error in the tender. “I also only discovered that by accident a few months later: at a site appointment with our construction company, Züblin.” A group of surveyors indicated that the muddied harbour basin would not be excavated in front of building lots 3 and 4 in the foreseeable future. And yet this pocket of land which belongs to the Free State of Saxony was highlighted as a body of water in both the city master plan as well as the tender document. “There is even water drawn in on the building signpost on Plautstraße to this day”.

He only discovered bit by bit that an excavation would never take place possibly due to nature conservation reasons. During an appointment with LESG a hydraulic ramp was used to test the visual relationship of the planned housing to the water. “If the basin is not excavated, no future house will be able to recognise water”. With a location in no man’s land, ARCADIA is not able to refinance the 20 million euro that the project developers wanted to invest.

The new canal section between Karl-Heine-Kanal and LIndenhauer Hafen should be opened in July. When the planned residential scheme will take place, is unclear.

In October 2014 the LVZ featured the fiasco at the residential area for the first time.