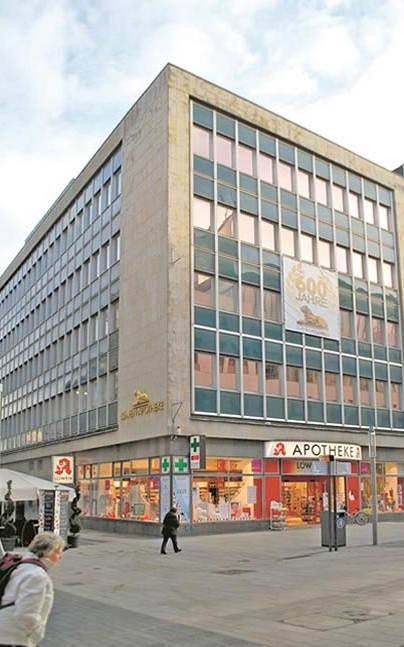 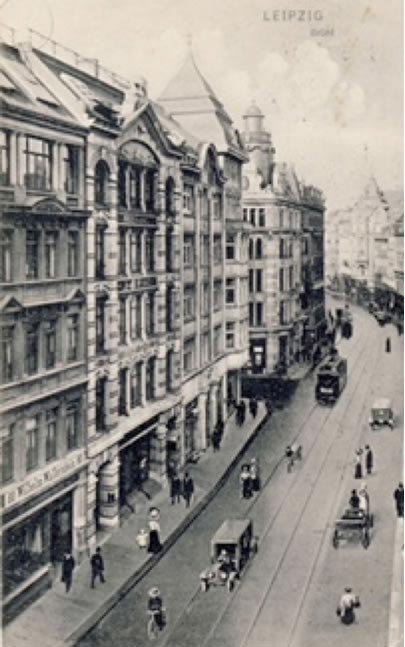 Historic view of the property at 52 BrühlPhotos: AR­CA­DIA Investment GmbH

The Leipzig ARCADIA Investment GmbH has paved the way for a new concept in one of the last available development areas in the Leipzig inner city. The company supervised the relocation of the oldest Leipzig pharmacy from 19 Grimmaische Straße to the property at 52 Brühl. The Löwenapotheke is taking the space previously occupied by the Starbucks coffee chain. Herewith the property at 19 Grimmaische Straße, which has an enormous development potential, can benefit from a restructuring and therewith an increase in usage value by the addition of retailers. The properties, Gloecks-Haus at 52 Brühl as well as 19 Grimmaische straße, both belong to the international operator Rumpf-Gruppe.

“The new development at Grimmaische Straße“, explained Alexander Folz, Managing Partner of ARCADIA Investment GmbH who are coordinating the project development and working with the Rumpf-Gruppe in an advisory capacity, “should be another highlight for the inner city of Leipzig”. After all, the listed property possesses three frontages: facing Grimmaische Straße, facing Nikolaistraße and facing Nikolaikirchhof. This constellation allows for use by modern retailers as well as maintaining the significant appearance characteristic of the building. As much as four levels containing retail space of 600 square meters each are conceivable. In principle he believes the development of this unique building in its solitary position to be possible by Christmas 2016.

The relocation of the Löwenapotheke – which is said to be the oldest pharmacy in Leipzig with its 600-year operation – will still take place in autumn this year. The Löwenapotheke will then replace the American coffee chain Starbucks in the historic Gloecks-Haus. The Gloecks-Haus is also known to Leipzig residents as Chinchilla-Haus because of its past as a fur trading building. The prestigious corner building was erected in 1909 and 1910 by the fur merchant Richard Gloeck according to the design of the Leipzig architect, O.P. Burghardt (1875-1959). Alexander Folz believes that this property should provide a suitable setting for Leipzig’s oldest pharmacy.

“It was a happy coincidence that Starbucks wanted to vacate its prominent location in the Gloecks-Haus on Bruhl”, explained Karsten Rumpf, Managing Director of the Rumpf-Gruppe. The work to be done on the cotta sandstone listed GDR building on 19 Grimmaische Straße should possibly already begin this year. “We are once again relying on the good collaboration with city representatives which has been the case with all our projects so far”, the investor emphasised. In fact, the Rumpf-Gruppe did not only refurbish the Gloecke-Haus, but they also revitalised the neighbouring building at 53 Nikolaistraße, which is occupied by a vegan supermarket. Karsten Rumpf is predominantly commercially active in the USA and Canada, but was in Leipzig last week to seal the deal with all the participants.

Under the name „Löwenapotheke” the owner Michael Sauter now operates four pharmacies in Leipzig and the region. “I am very happy we found a solution for our main building”, he said. “Therewith we have not only secured our long-term survival in the city but we have also kept all our jobs safe.” The Löwenapotheke has occupied many locations on Grimmaische Straße since 1423. First they had a location in the garden of Pauliner Monastry, and subsequently in a building on the market square. The many pharmacy-families over the years represented reputable councilmen and prominent scientists. During the GDR the widely known company was first state-owned and then appointed as the district pharmacy. As ever-more functions were transferred to the Löwenapotheke, 19 Grimmaische Straße was newly erected for it from 1975 to 1983. More than 200 employees worked on all 6 levels until shortly after the German reunification. Since then, this building has been mostly empty.

The ARCADIA Investment Group has focused its specialisation on the development of property used for retail and residential properties as well as car parks and underground car parks throughout the entire Germany. In addition to activities relating to its own portfolio, it has also implemented a host of projects in the framework of joint ventures – amongst others in close collaboration with international companies. One of the company’s core business functions is the optimisation, maintenance and expansion of the property portfolio of family businesses with the utmost care and confidentiality.