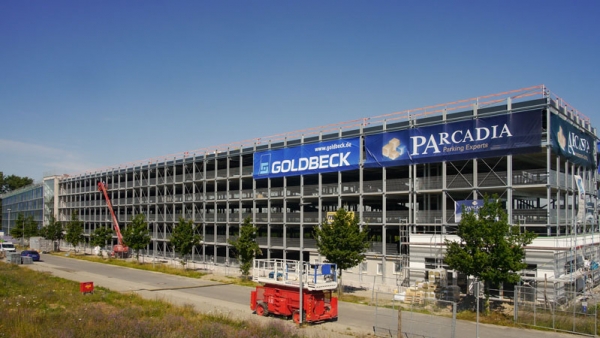 On 15 July 2020, only 11 months after the laying of the foundation stone, the topping out wreath hovered over the completed shell of the “Northgate” multi-storey car park, in the immediate vicinity of the future Berlin Airport BER. On an approximately 10,000 square metre building site in the “gatelands” business park, the real estate developer ARCADIA Investment Group is building a multi-storey car park with more than 1,500 parking spaces on 12 half-levels. Construction of the multi-storey car park had already begun in July 2019. On 7 August 2019, the foundation stone was laid together with the general contractor Goldbeck Nordost GmbH, Berlin-Brandenburg.

“Despite the restrictions surrounding the Corona crisis, we succeeded in completing the shell of the building within the planned timeframe. Crises like this show just how important reliable partners are. Our thanks go to Goldbeck and the subcontractors involved”, explains Björn Franke, head of project management at the ARCADIA Investment Group. The topping out ceremony was celebrated with the the general contractor and the companies involved in the project in compliance with the applicable hygiene and social distancing regulations.

Negotiations regarding the future operation of the multi-storey car park were already underway before construction began. A lease contract with a term of 20 years was concluded with Goldbeck Parking Services GmbH. The car park is scheduled to be commissioned by the operator on 6 November 2020 – in time for the opening of the BER on 31 October 2020. 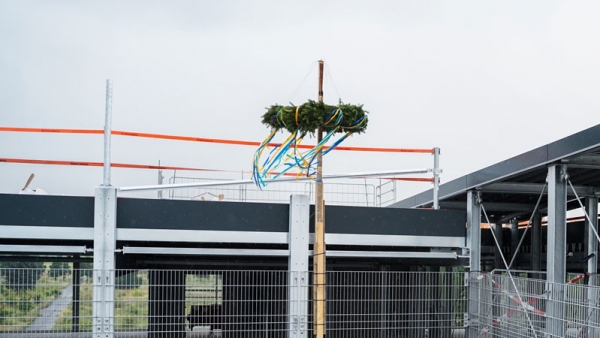 The “gatelands” business park is being built on an area of around 100,000 square metres in close vicinity to the capital’s new airport BER. The business park area offers space for hotels, offices, service and retail facilities and is going to have a total floor area of approx. 250,000 square metres. Due to the short distances to the city centre of Berlin, the connection to the motorways A 113 (Berlin City) and A 10 (motorway ring) and the already ensured building rights, the area will be one of the most attractive development sites on the outskirts of Berlin. Particularly, because of the high demand on the Berlin office market.

Besides various office buildings, several hotels are being built, of which the B&B Hotel Berlin-Airport has already been opened. The building permit for a hotel of the Moxy brand has been granted, as well as for an office development with approximately 15,000 square metres. The “gatelands” business park also includes approximately 20,000 square metres of forest with ponds and green areas.