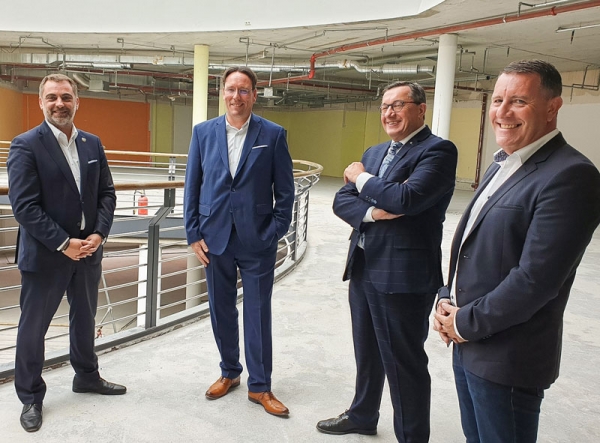 The Leipzig-based ARCADIA Investment Group has leased approximately 8,275 square metres of rental space in the newly designed shopping arcade “Otto Dix Passage” in Gera to DMS Daten Management Service GmbH. The nationwide energy service provider will move into the entire first and partial areas of the second floor in stages in spring and summer 2021. With the conclusion of the 15-year lease agreement, DMS will move from Reichsstraße 5 to the “Otto Dix Passage” at Museumsplatz 2 in Gera and expand its previous company headquarters. The necessary conversion work of the shopping arcade has already begun.

Therefore, the core removal works, with the dismantling of the old building technology, in particular the removal of the escalators, started again last week after a longer break. “We are very pleased to have won one of Gera’s most important and largest employers as an anchor tenant for the “Otto Dix Passage”,” explains Alexander Folz, managing partner of ARCADIA. “Due to the current development of the stationary trade, caused by the effects of the Corona crisis, we have generally considered a change in strategy”. Together with representatives of the municipality, the legal framework was worked out, which made the conversion of the two upper floors from retail to office possible. “It would not have been possible to implement the project in such a short time without the pragmatic support of the municipality,” explains Alexander Folz. As a result, the previous utilisation concept of the “Otto Dix Passage” will be fundamentally revised and adapted to the new market conditions.

The completion of the conversion works is planned for the last quarter of 2021. The plan is for a mix of modern office space, fitness and catering areas and retail space – in particular with convenience goods. In perspective, a total of 800 – 1,000 jobs are to be created in the property.

Already in April 2018, the ARCADIA Investment Group had acquired the inner-city shopping centre with a rental area of more than 14,000 square metres at Museumsplatz 2 in Gera as well as the adjacent multi-storey car park with approx. 375 parking spaces. The property developer announced plans for expansion, conversion and revitalisation of the buildings. The old shopping centre is to be reopened with attractive tenants and is to become the heart of the city centre. In this way, the new “Otto Dix Passage” will once again do full justice to the prime location between the market, Sorge and the development project “Gera’s Neue Mitte”.

The DMS Group, based in Gera, is the largest independent service provider in Germany specialising in the energy industry. The company employs more than 650 people at seven locations throughout Germany, of which about 380 are currently employed in Gera. In addition to process and dialogue services, the group of companies offers consulting services and a wide range of further training opportunities. DMS works for over 50 utilities, including the market leaders in Germany as well as small and medium-sized municipal utilities and electricity and gas suppliers, which it supports in commercial processes and with customer services. DMS has broad expertise in the market-dominant accounting systems, and in recent years has been able to significantly expand its range of digitalisation and automation systems. Since 2019, solutions involving artificial intelligence have also been placed on the market.

The new attractive and functional office and administration premises with generous communication, training and creative areas in the “Otto Dix Passage” will provide excellent support for the successful development and expansion of the company.