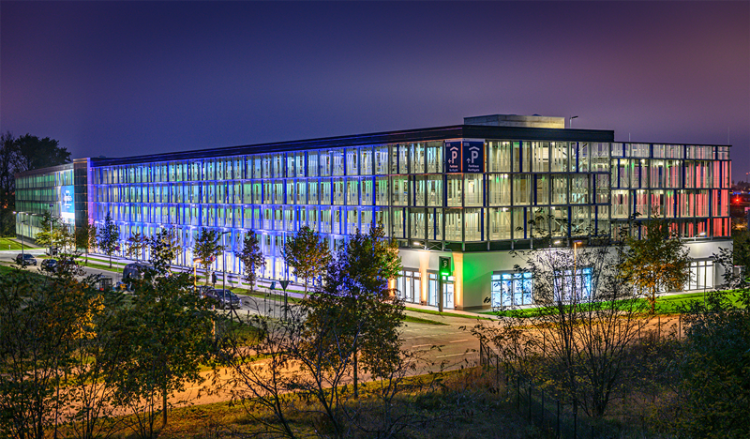 The “Northgate” multi-storey car park with around 1,500 parking spaces was built in the immediate vicinity of the new Berlin Brandenburg Airport “Willy Brandt”. The client ARCADIA Investment Group handed over the car park to the future operator in time for the opening of BER.

After a construction period of only 15 months, a new multi-storey car park with more than 1,500 parking spaces opened on 6 November 2020, near Berlin’s BER airport. The approximately 10,000 square metre site of the “Northgate” multi-storey car park is part of the “gatelands” business park, which is being built on a site of around 100,000 square metres and is directly linked to the capital airport. The car park is located at the “Flughafen Berlin Brandenburg” exit of the A113 motorway, is opened 24 hours and has twelve half-levels.

“We are very proud of this successful project and would like to thank the general contractor GOLDBECK Nordost GmbH, Berlin-Brandenburg branch, for a smooth process and professional cooperation – especially under the special circumstances during the pandemic”, says Alexander Folz, managing partner of ARCADIA.

Negotiations on the future operation of the multi-storey car park were already underway before the start of construction began. ARCADIA concluded a lease agreement with GOLDBECK Parking Services GmbH with a term of 20 years. The client and the operator decided not to hold a celebration on site and offered a “digital opening ceremony”. All companies involved in the project received a welcome cocktail by post, so that they could toast the opening of the car park regardless of location.

The “gatelands” business park is being built on an area of around 100,000 square metres in the immediate vicinity of the capital city’s BER airport. It offers space for hotels, offices, service and retail facilities. In total, buildings with a total floor area of approximately 250,000 square metres are planned and approved here. Thanks to its premium location on the BER airport and the connection to the A 113 and A 10 motorways, the area is one of the most attractive development locations in the surroundings of Berlin.

In addition to various office buildings for individual users, several hotels are also being built. The B&B Hotel Berlin-Airport has already been opened. Planning permission has been granted for a hotel of the Moxy brand, and the office development “FLEXGATE” with approximately 15,000 square metres is under construction. Further hotels and office buildings are in the planning and approval process. The “gatelands” business park also includes approximately 20,000 square metres of forest with ponds and green areas.