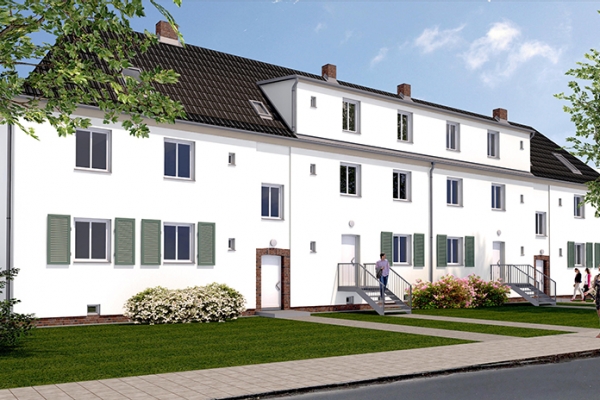 Rendering of the houses for the 2nd construction phase along Matthias-Erzberger-Straße in TauchaPhoto: ARCADIA Investment Group

In the first construction phase the appealing 1930s settlement was carefully converted into modern and generously proportioned single-family homes by the architect Ulrich Kalkof of the KALKOF ARCHITEKTEN GMBH architectural office of the same name, who was responsible for the construction. Along an old avenue of lime trees, the houses have between 125 and 170 m² of living space after renovation. In the second construction phase “Lindenquartier Ambiente” a further 16 single-family houses are currently being built in Taucha along Matthias-Erzberger-Straße.

While the buildings of the first construction phase are aligned along Matthias-Erzberg-Straße, which requires the common use of the access road to the individual houses, the second construction phase impresses with the parallelism of the buildings to the street of Matthias-Erzberger-Straße. In this way, every property owner has direct access to the sidewalk, the parking space and the residential street. 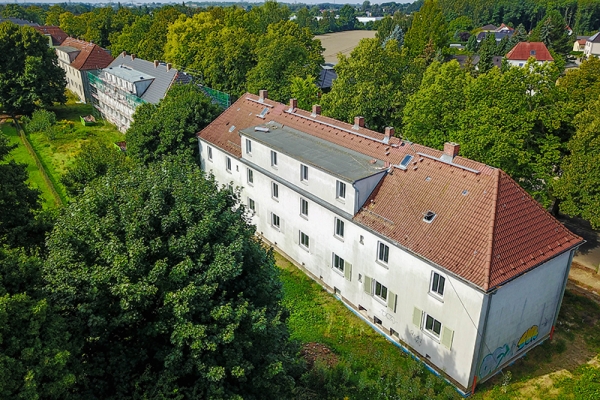 Aerial view of the houses of the „Lindenquartier” residential projectPhoto: ARCADIA Investment GmbH

The second construction phase consists of a total of four structures, each of which is divided into four homes. The entrances to the houses are essentially positioned to the north or northwest, while the garden plots are predominantly oriented to the south and far away from the road.

The timely marketing of the second construction phase is pointed out by Chris Poschmann, who is responsible for the marketing of “Lindenquartier Ambiente”. The last 5 houses will be sold by the autumn of this year. “By the summer of next year,” he says, “the estate will be fully completed and nothing will remind us of the dreary times of the previously un-refurbished houses.”

ARCADIA Investment Group has focused its specialisation on the development of property used for retail and residential properties as well as car parks and underground car parks throughout the entire Germany. In addition to activities relating to its own portfolio, it has also implemented a host of projects in the framework of joint ventures – amongst others in close collaboration with numerous national and international companies. One of the company’s core business functions is also the optimisation, maintenance and expansion of the property portfolio of family businesses with the utmost care and confidentiality. ARCADIA Investment GmbH as the holding company for the group currently employs 28 people and is developing areas with a magnitude of more than 300,000 square meters. The accompanying project volume amounts to round 250 million euro.

For enquiries please contact Herr Ralf Bettges, , Press and Public Office at 0172 – 233 73 90 Further information about ARCADIA Investment Group can be found at www.arcadia-invest.de.