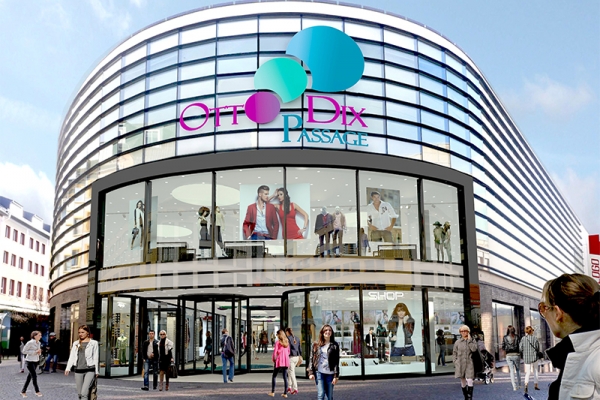 The naming competition initiated by the ARCADIA Investment Group as the new owner of the Elster Forum in May of this year has been decided. From 111 suggestions received the four jurors voted the “Otto-Dix-Passage” in first place.

The four jurors Julian Vonarb (Lord Mayor of Gera), Heike Drechsler (athlete and honorary citizen of her native town Gera), Heiko Vajhen (architect) and Alexander Folz (Managing Director of ARCADIA Investment GmbH) had to evaluate ten proposals that made it into the final round in a points system. After “Otto-Dix-Passage”, the name “Museumsgalerie” ranked second ahead of “Galerie am Museumsplatz”. The winner of the competition is 54-year-old Mathias Dobbrunz from Reichstädt, who was inspired by Otto Dix City and suggested the name “Otto Dix Passage” first. All ten finalists were awarded prizes.

Lord Mayor Julian Vonarb and Alexander Folz were more than satisfied with the new name. Although both had a different favourite, the “Otto-Dix-Passage” was also very high on their ranking lists.

In April 2018, ARCADIA had already acquired the inner-city shopping centre with a rental area of more than 14,400 square metres at Museumsplatz 2 in Gera as well as the associated multi-storey car park with approx. 376 parking spaces and announced its plans for conversion and revitalisation. The ageing inner-city shopping centre in the city centre is to be renovated from 2019 and will once again accommodate attractive tenants when it reopens. In this way, the new “Otto-Dix-Passage” will once again do full justice to the prime location between the Markt, Sorge and Gera arcades.

For ARCADIA managing director Alexander Folz, the repositioning and new image of the centre plays a decisive role as does the complete overhaul and redesign of the property. “The new name serves as an important building block for this,” he says, “with its high level of identification within the Gera citizenship.“

The artist Otto Dix, born in 1891 in today’s Gera, is regarded as one of the most important and influential representatives of the genre of New Objectivity at the beginning of the 20th century. From 1914 to 1918 he voluntarily took part in the First World War and incorporated his experiences into his paintings. He criticized both war and society in works such as ‘Schützengraben’, ‘Großstadt’ or ‘Prager Straße’. In 1927 Dix became professor at the University of Fine Art in Dresden. He lost his position at the Prussian Academy of Fine Arts in Berlin in 1931 at the instigation of the Nazis, who had also imposed an exhibition ban on him. Otto Dix died on 25 July 1969 in Singen.

ARCADIA Investment Group has focused its specialisation on the development of property used for retail and residential properties as well as car parks and underground car parks throughout the entire Germany. In addition to activities relating to its own portfolio, it has also implemented a host of projects in the framework of joint ventures – amongst others in close collaboration with numerous national and international companies. One of the company’s core business functions is also the optimisation, maintenance and expansion of the property portfolio of family businesses with the utmost care and confidentiality. ARCADIA Investment GmbH as the holding company for the group currently employs 28 people and is developing areas with a magnitude of more than 300,000 square meters. The accompanying project volume amounts to round 250 million euro.

For enquiries please contact Herr Ralf Bettges, Press and Public Office at 0172 – 233 73 90 Further information about ARCADIA Investment Group can be found at www.arcadia-invest.de