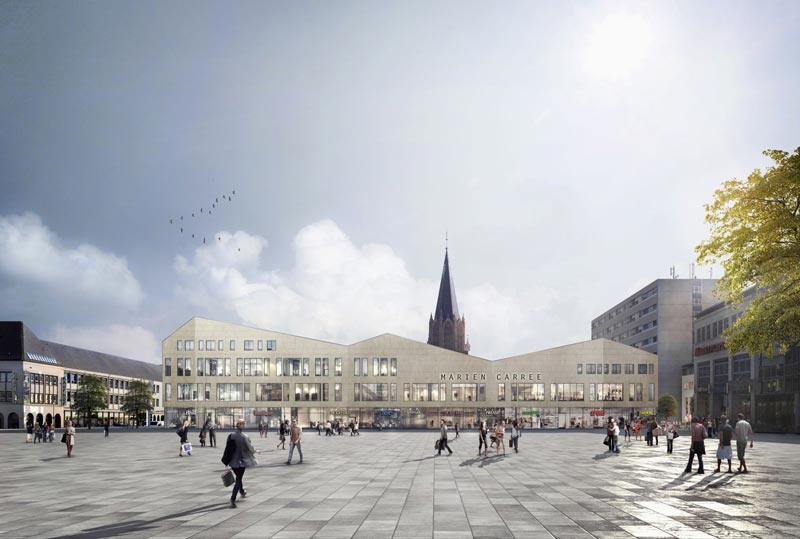 The Hamburg Achim Griese Treuhandgesellschaft mbH and the Leipzig ARCADIA Investment GmbH have found tenants for a flagship store with over 850 m² leasing space in a development project, Marien-Carrée, on 1 Treptower Straße in the Neubrandenburg inner city. With the Marien-Carrée project, the project partners are developing the some 7,000 m² area into numerous building units measuring a total of round 21,000 m². In doing so more than 8,000 m² of retail space is created, which is partly spread over two or three sales levels. In this way the gap between the market centre of the ECE and the Turmstraße is closed with the emergence of high-end retailers having more than 100 meters of display window frontage in the absolute best location in the city. A car park and a large grocery store will likewise be erected on the southern part of the property as well as more shop areas.

The Marien-Carrée centre creates a bridge in the best location in the city between the existing retail areas, i.e. between the pedestrian zone on Turmstraße with Galeria Kaufhof and the C&A building as well as H&M on the opposite side and the Marktplatz Center of ECE.

Alexander Folz, Managing Partner of ARCADIA Investment GmbH, is equally confident about the success of the project as his Hamburg project partner Achim Griese Treuhandgesellschaft mbH said, “We are currently negotiating with tenants who guarantee a sector mix rich in diversity. With the Marien-Carrée project we have managed an important should-to-shoulder connection to the established retail trade for the benefit of both – and for the long-term security of the Neubrandenburg retail location.”

A location that has what it takes. The Neubrandenburg regional centre, in addition to a stable population development according to the GfK, also boasts a very high centrality of 140. A value that is very scarce in East Germany. The purchasing power is also notably higher than Leipzig or Dresden, for instance. The city has approximately 70,000 inhabitants but, according to a survey done by the universities of Görlitz and Greifswald, benefits primarily from a generous catchment area of around 350,000 people in a perimeter of only 30 minutes drive time. The actual reach of the city is however way beyond the 30 minute driving perimeter.

“It is then not surprising”, explains Mr Folz, the retail expert, “that dm-Drogeriemarkt has already put the search for the perfect location behind it a few years ago. The company’s profile that requires a shop unit from 500 m² upwards made it no easy task to find a suitable property in a city with predominantly historic buildings in its city centre.”

According to the plans of the Hamburg architect’s office, Kunst + Herbert, with the Marien-Carrée project a total of eleven shop units will be created up to the last quarter of 2017. “On the southern part of the property a grocery store and a car park will be erected to accommodate the high centrality and therewith also the growing demand for easy accessibility for visitors from the surrounding areas. Especially as a further 160 on-street parking spaces will be lost in the inner city owing to more development activities in the city centre.”

The binding site plan for the implementation of the project is currently underway in close collaboration with the city of Neubrandenburg. The wrecking licence for the demolition work on the property has already been granted.

Achim Griese Treuhandgesellschaft mbH is an owner-managed property developer, which has implemented more than 140 real estate projects with a total project volume of over 2.1 billion euro since 1982. More than 100 of these projects were placed at the classic institutional investors, most of which took over numerous projects in succession. In doing so the focus was placed on retail property, however also residential, mixed-use and special use properties fall within the repertoire of the Hamburg developer. Particularly in the eastern part of Germany Achim Griese Treuhandgesellschaft mbH has successfully implemented many projects.

ARCADIA Investment Group has focused its specialisation on the development of property used for retail and residential properties as well as car parks and underground car parks throughout the entire Germany. In addition to activities relating to its own portfolio, it has also implemented a host of projects in the framework of joint ventures – amongst others in close collaboration with international companies. One of the company’s core business functions is the optimisation, maintenance and expansion of the property portfolio of family businesses with the utmost care and confidentiality. The ARCADIA Investment Group currently employs seventeen people and is developing areas with a magnitude of more than 100,000 square meters. The accompanying project volume amounts to round 95 million euro.