ARCADIA remains one of Europe’s fastest growing companies in 2021

ARCADIA remains one of Europe’s fastest growing companies in 2021 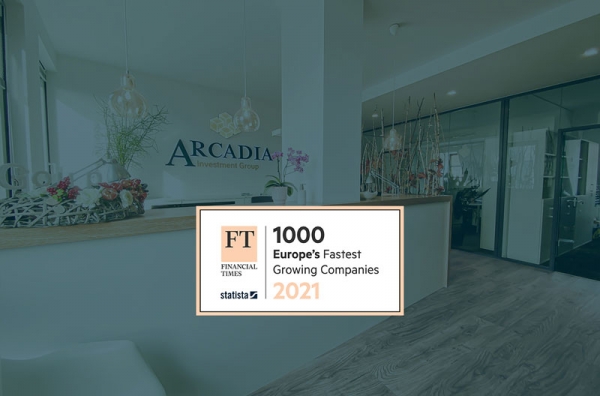 For the third time in a row, the real estate developer ARCADIA is one of the European fastest growing companiesPhoto: ARCADIA Investment Group

For the fifth time in a row, the British newspaper Financial Times has chosen the fastest growing companies in Europe in cooperation with Statista. The Leipzig-based ARCADIA Investment Group is among the top 1,000 European companies with the strongest sales growth in 2021 and and ranks 960th in the overall ranking of the special report “FT 1000 – Europe’s Fastest Growing Companies 2021”. A total of 204 German companies made it into the overall ranking.

Alexander Folz, Managing Partner of ARCADIA, sees the international award as confirmation of the development strategy of the group of companies. “The continuity reflected in the third award in a row, is the result of an organic employee growth in line with the implementation of our nationwide projects. To belong to Europe’s corporate elite as a medium-sized real estate developer is a great success for the entire ARCADIA team.” In the evaluation period from 2016 to 2019, ARCADIA recorded an overall revenue growth of 158 percent and a compound annual growth rate (CAGR) of 37.2 percent.

For the ranking of the “FT 1000”, 1,000 companies with the highest growth rates between 2016 and 2019 were identified from 33 European countries and more than 10,000 analysed companies. Selection criteria for the survey included having a company headquarters in one of the listed countries, predominantly organic increase in turnover, and minimum turnover of €100,000 in 2016 and €1.5 million in 2019.

The complete ranking of the Financial Times can be viewed at www.ft.com.