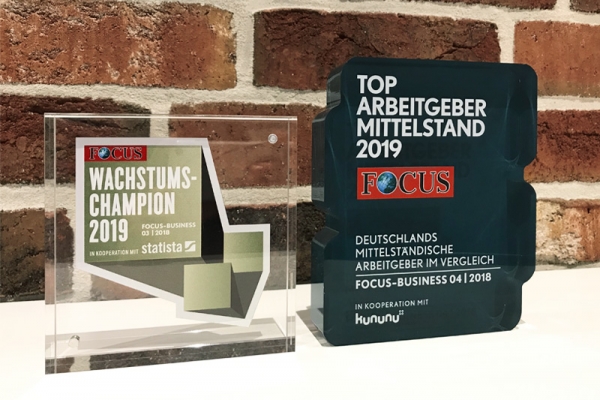 FOCUS-Business has once again presented the “growth champions” in Germany in a ranking. The list of the 500 growth champions lists companies that achieved a particularly high percentage growth in sales per year between 2014 and 2017. Both privately owned and market-listed companies were included. The ARCADIA Investment Group was ranked 98th in the list.

The participation in the competition required independent, German-based companies, which had a minimum sales growth of 100,000 euros in 2014 and a minimum sales growth of 1.8 million euros in 2017. From more than 2 million entries in the commercial register, the Hamburg-based Statista Institute filtered out the 500 fastest-growing companies in Germany, which are now entitled to bear the “Growth Champion 2019” award.

In cooperation with the employer evaluation platform Kununu, FOCUS-Business has also identified the top employers of medium-sized businesses in 2019 and listed them in a total ranking of 2,800 employers in 22 sector lists. This survey was based on 750,000 German companies with around 3 million employee ratings on the Kununu Internet platform. The ranking only included companies that had a rating of at least 3.5 points, a total of at least 10 ratings and between 11 and 500 employees.

“We regard the two awards as a result for a labour-intensive growth that we only achieved together with our competent and committed employees,” explains Alexander Folz, Managing Partner of ARCADIA Investment GmbH. This had been the fundamental requirement for the success of the last five years. Mr Folz also sees the award as a motivation for the next important steps towards the future after the first development phase. According to Folz, this includes the further development of core competences and the stabilisation of the market position based on the successful implementation of the current project developments. In this way, Mr. Folz wants to confirm the trust placed in ARCADIA in the coming years.

The ARCADIA Investment Group specialises in the development of retail properties, residential properties as well as car parks and underground car parks throughout Germany. In addition to activities relating to the company’s own portfolio, it has also implemented a host of projects in the framework of joint ventures – amongst others in close cooperation with several national and international investors. The company’s core business also includes the optimisation, maintenance and expansion of the property portfolio of family businesses with the utmost care and confidentiality. ARCADIA Investment GmbH, the holding company of the Group, currently employs 31 people and is currently developing areas with more than 300,000 square metres of space nationwide. The associated project volume currently amounts to approximately 250 million euros.