ARCADIA once again among the FT 1000

ARCADIA once again one of Europe’s fastest growing companies 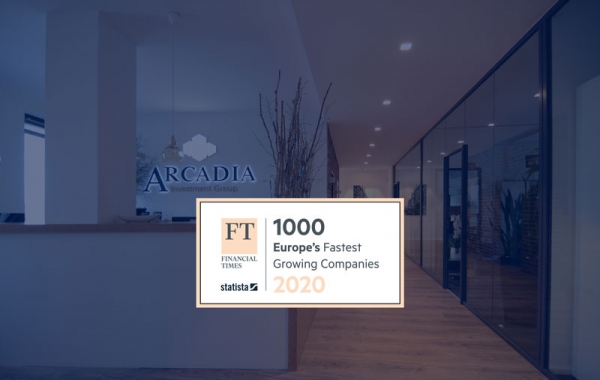 The British newspaper Financial Times has again awarded ARCADIA Investment GmbH as one of the fastest growing companies in Europe. For the second time in a row, the Leipzig-based real estate developer is among the top 1,000 European companies with the strongest growth in turnover. In the overall ranking of the special report “FT 1000 – Europe’s Fastest Growing Companies 2020” ARCADIA is ranked 870th.

Alexander Folz, managing partner of ARCADIA, is proud of the development of the company, which was founded eight years ago. “We see the repeated award as acknowledgement for the work of the last few years, as sign of an increased potential and a higher level of awareness”. In the evaluation period from 2015 to 2018, ARCADIA recorded a sales growth of 192.1 percent and an annual growth rate (CAGR) of 42.9 percent. “This would not have been possible without our team and the trusting, long-standing cooperation with our business partners. For the future we expect a further increase in both the number of projects and the average project volume”. In particular, the nationwide launch of a modular terraced house system will contribute to this. The Group has been working on this family-friendly, energy-efficient and innovative product for the past three years and will implement the first pilot project in the third quarter of 2020.

In cooperation with Statista, the Financial Times evaluated 1,000 companies from 33 European countries across all sectors. For the analysis, the percentage development of turnover figures between 2015 and 2018 was examined. Admission criteria were, amongst others, a predominantly organic increase in turnover as well as minimum turnover of 100,000 euros for 2015 and 1.5 million euros for 2018.

The complete ranking of the Financial Times can be viewed at www.ft.com.