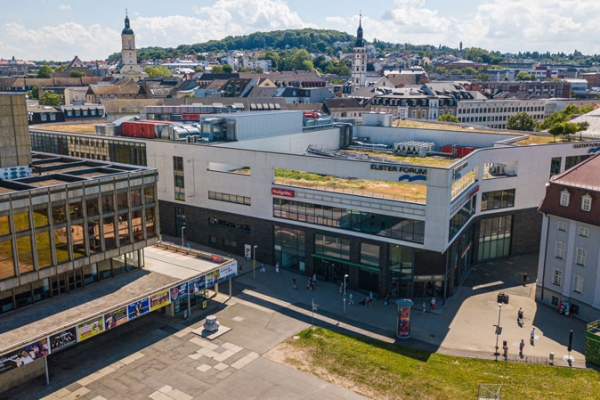 The Leipzig-based ARCADIA Investment Group has found a new tenant for the inner-city “Otto Dix Passage” at Museumsplatz 2 in Gera. The fitness studio Fit/One which operates several studios throughout Germany concluded a twelve-year lease agreement and is thus opening its first studio in Gera. After the complete renovation of the newly designed shopping arcade, Fit/One will move into the approximately 1,933 square metres of rental space in the first quarter of 2022.

Only recently, ARCADIA concluded a lease agreement with the Gera-based energy service provider DMS for around 8,275 square metres of rental space. With the conclusion of these two lease agreements, ARCADIA’s letting team completes the tenant mix already consisting of Rossmann, Pfennigpfeiffer and BARMER. The “Otto Dix Passage” thus has an occupancy rate of over 75 percent. “We are pleased that we have once again been able to record a significant letting success despite the COVID-19 pandemic and the resulting difficult conditions. The occupancy rate of more than 75 percent underlines the attractiveness of the highly frequented location in Gera and brings us closer to our goal of full occupancy with an exciting and diverse tenant mix,” says Alexander Folz, managing partner of ARCADIA.

Already in April 2018, the ARCADIA Investment Group had acquired the inner-city shopping centre with a rental area of more than 14,000 square metres at Museumsplatz 2 in Gera as well as the adjacent multi-storey car park with approximately 375 parking spaces. The property developer announced plans for expansion, conversion and revitalisation of the buildings. The old shopping centre is to be reopened with attractive tenants and is to become the heart of the city centre. In this way, the new “Otto Dix Passage” will once again do full justice to the prime location between the market, Sorge and the development project “Gera’s Neue Mitte”.