ARCADIA hands over 8,300 m² of office space in “Otto Dix Passage” to DMS 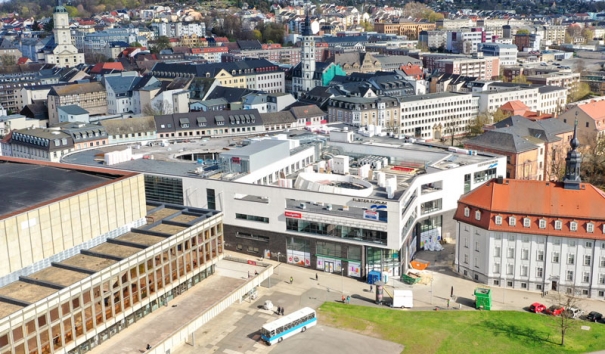 The “Otto Dix Passage” in Gera, which is currently being renovatedPhoto: ARCADIA Investment Group | Andreas Kusow

ARCADIA Investment Group has handed over an 8,300 square metre office space in the mixed-use building “Otto Dix Passage” in Gera’s city centre to the new anchor tenant DMS Daten Management Service GmbH. After a conversion period of around ten months, the first modernisation phase of the revitalisation has thus been completed. The Gera-based energy service provider occupies the entire first floor and parts of the second floor, including a roof terrace. In addition to classic office space the modern spatial concept also includes communication, training and creative areas. A green roof terrace with integrated bicycle parking and several break areas round off the employee amenities. The total of around 380 employees have already fully moved into their new offices in the inner-city shopping arcade at Museumsplatz 2 in Gera.

The completion of the second construction phase and the handover of the rental space was celebrated by the building owner and the companies involved in the construction in a small circle on site. “We thank all those involved in the project who helped to realise the very fast implementation of the refurbishment measures within only ten months. We are looking forward to continuing this great cooperation in the course of the subsequent second renovation phase,” says Alexander Folz, managing partner of ARCADIA. In addition to DMS, the chemist’s shop Rossmann, the fitness studio Fit/One as well as BARMER health insurance and Volksbank eG Gera Jena Rudolstadt will long-term tenants in the property.

Already in April 2018, an investment company of ARCADIA Investment Group had acquired the former shopping centre and announced plans for an expansion and conversion. ARCADIA has been revitalising the building since early September 2020. The general contractor for the conversion of the “Otto Dix Passage” is Prehn Bauprojektmanagement GmbH from Lubmin. After its reopening, the newly designed shopping arcade will have around 16,500 square metres of usable space, meet modern building standards designed for sustainability, and have an attractive tenant mix with various types of use.

The DMS Group, with 7 locations in Germany and a total of 680 employees, is one of the largest service providers in Germany specialising in the energy market. In addition to DMS Energie, which provides commercial services for the utility industry, the group consists of the training institute DMS Akademie, the consulting company PMD Experten, and DMS Automation, which designs solutions in the field of automation and AI.