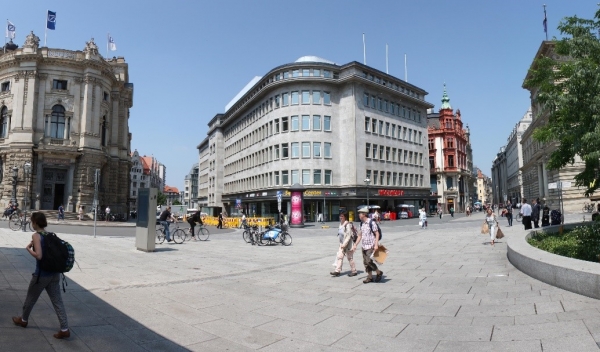 Die Leipziger ARCADIA Investment Group has brokered a retail space of round 800 m² to the dm health-and-beauty-store chain. In addition to the physiotherapists, Arcanum, and the PETERSEN HARDRAHT law office, dm Drogeriemarkt is already the third new tenant on the property which has been brokered by ARCADIA after the commencement of restructuring and repositioning measures. The opening of the new dm Drogeriemarkt is planned for the beginning of 2017.

The cancellation of the tenancy agreements for KiK and Woolworth was a necessary prerequisite according to Alexander Folz, Managing Director of ARCADIA Investment Group. This was an essential precondition for successfully repositioning the Merkurhaus whose location as a portal entrance has emerged ever more distinctly over the past few years. A fact which has clearly been given expression by the successful leases concluded in the more recent past.

The building with its dominant solitary position forms the entrance to the main shopping street, Peterstraße, which is the most-frequented pedestrian zone in Leipzig. This street is found in the immediate vicinity of the new city hall as well as the most important entry and exit points of the city tunnel in the direction of Peterstraße. The Merkurhaus also benefits from the upgrading of the pedestrian zone directly in front of the property. The objective of the already developed concept is the optimization and adaptation of the property to its upmarket surroundings as well as its long-term realignment as a commercial building in an A1 location.

Merkurhaus was built as a textile department store in 1937 by Karl Fezer in the New Objectivity style. Its consistent window frontages and shell limestone facade make this building very impressive. From 1969 to the beginning of the 1990s it was the headquarters of the Leipzig School of Commerce (Handelshochschule Leipzig). It has subsequently been used by C&A, Karstadt Sport and more recently by Woolworth until its realignment.

In 1973 the first dm store was opened in Karlsruhe. Today, dm stores are found in twelve European countries with more than 3,000 stores in total. The company employs some 55,000 people in Europe, 38,500 of which work in Germany.

ARCADIA Investment Group has focused its specialisation on the development of property used for retail and residential properties as well as car parks and underground car parks throughout the entire Germany. In addition to activities relating to its own portfolio, it has also implemented a host of projects in the framework of joint ventures – amongst others in close collaboration with numerous national and international companies. One of the company’s core business functions is also the optimisation, maintenance and expansion of the property portfolio of family businesses with the utmost care and confidentiality. The ARCADIA Investment Group currently employs seventeen people and is developing areas with a magnitude of more than 160,000 square meters. The accompanying project volume amounts to round 130 million euro.