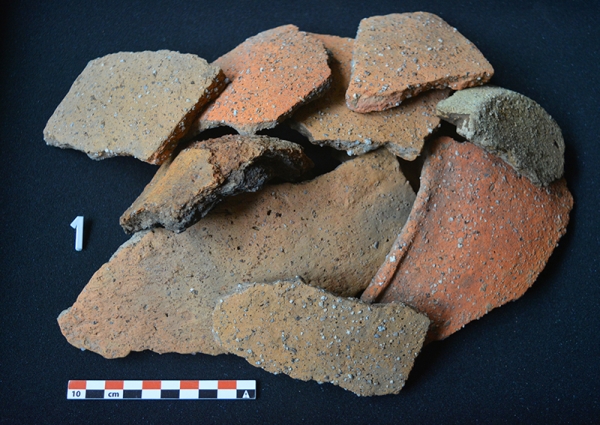 The archaeological excavations that started at the beginning of April and were carried out by the Berlin-based company archaeofakt DÖHNER + USCHMANN + PARTNER GbR on the approx. 10,000 m² development site have now been completed on schedule. Although no archaeological monuments have been registered in the area of the construction project so far, the development area was designated for archaeological surface excavations due to the known prehistoric archaeological monuments in the north as well as in the south. During the excavations, 18 prehistoric pits were found on the side on which the planned multi-storey car park “Northgate” is now being built. Moreover, numerous ceramic fragments – occasionally with ornaments – which can be assigned to the Early Iron Age spectrum, were found and catalogued.

Even before the archaeological excavations began, PARCADIA BER Projekt GmbH, a project company of the ARCADIA Investment Group concluded the general contractor agreement with Goldbeck Nordost GmbH Berlin-Brandenburg as a highly specialised general contractor for the construction of the multi-storey car park.

“I am pleased to be able to implement such a challenging development together with a well-known and experienced family business such as Goldbeck”, says Alexander Folz, managing director of the project company. “Unfortunately, politicians have not yet understood that even challenges such as the completion of the BER need a positive image building to be able to develop a corresponding effect, e.g. as a growth impulse on the direct and indirect environment. We are confident of the significance and success of this infrastructural project and that is why we are building.”

The construction works on the multi-storey car park began at the beginning of July 2019. Currently civil engineering work and foundation work as well as the construction of the dewatering facilities are taking place. “Northgate” will be the first multi-storey car park in the “gatelands” business park with more than 1,500 parking spaces on twelve half-levels. The owner and the general contractor expect the car park to be completed on schedule in November 2020. 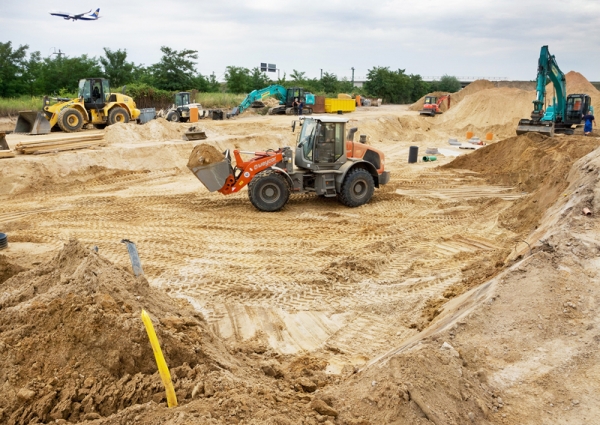 Current state of construction on the side of the future multi-storey car park “Northgate”Photo: Contempo Zeitraffer

The new “gatelands” business park is being built on an area of around 100,000 m² in close vicinity to the capital’s new airport. The business park area offers space for hotels, offices, service and retail space and is going to have a total floor area of approx. 250,000 m². Due to the prime location, the short distances to the city centre of Berlin, the connection to the motorways A 113 (Berlin City) and A 10 (motorway ring) and the already ensured building laws, the area will be one of the most attractive development sites on the outskirts of Berlin. Particularly, because of the high demand on the Berlin office market.

Besides various office buildings, several hotels will be built, of which the B&B Hotel Berlin-Airport has already been opened. The building permit for a hotel of the Moxy brand has already been granted. In addition, a building application has been filed for an office development with approx. 15,000 m². The business park “gatelands” includes approx. 20,000 m² of forest with ponds and grassy areas.

GOLDBECK is one of the leading construction companies in Germany. As a technology leader, the company designs, builds and revitalises buildings with systems for production and logistics, offices, retail, residential use and parking. In addition, GOLDBECK offers integrated building-related services over the entire life cycle of a property. Goldbeck is a partner for medium-sized businesses as well as for large companies, investors, real estate developers and public clients. In the fiscal year 2017/18 the company realised more than 513 projects with a total output of 2.73 billion €. Goldbeck currently employs more than 6,500 people.

The company archaeofakt is a scientific service company in the fields of archaeology, building research and monument preservation with its headquarters in Berlin. This sector has developed even more strongly in recent years and has led to an independent field of work within archaeology. The company archaeofakt has specialised in large-scale projects between scientific demands and professional solutions. In addition to carrying out the excavations, planning and project development are particularly in the focus of the company’s development. The earlier archaeology is integrated into planning processes, the more successful projects will be. For this reason, project management is just as important as the scientific work of the archaeological excavations. The participation of archaeofakt employees in international research projects and the constant exchange with scientific institutions guarantee the use of state-of-the-art methods at work.