ARCADIA and Süß Group plan residential quarter on the outskirts of Leipzig on 85,000 square metres of land 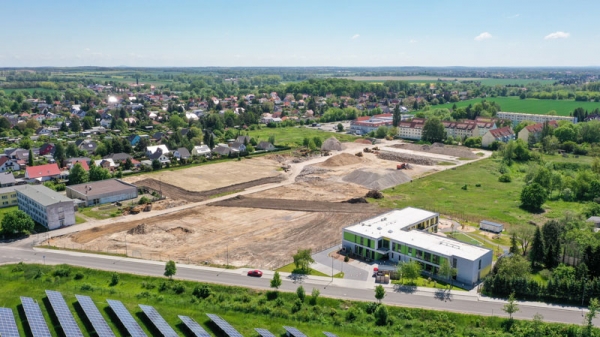 The “Gartenstadt” is being built on Eilenburger Straße in Taucha. Construction of the residential quarter is scheduled to begin this year.Photo: ARCADIA Investment Group | Andreas Kusow

The ARCADIA Investment Group and the Süß Group are planning a new residential development on an approximately 85,000 square metre site in Taucha, north-east of Leipzig. On the premises of a former poultry farm on Eilenburger Straße, a residential quarter with potential for around 100 residential plots for single-family, semi-detached, and terraced houses is planned. In addition, a new EDEKA supermarket will be built on a section of the site totalling around 6,650 square metres to supply both existing and new residents.

The development plan of the “Gartenstadt” neighbourhood development, as the project is called, was adopted by the Taucha city council on 12 February 2021. The deconstruction work of the fallow land has already been largely completed by Süß Bau GmbH. After conclusion of the development contract with the city of Taucha, the development planning can be finalised in the short term. Immediately afterwards, the land development as well as the marketing of the building plots to prospective buyers can be started.

For the existing building in the north of the site, utilisation concepts for the establishment of a retirement home or medical centre are currently being developed and tested for feasibility. In addition, the neighbourhood concept provides for the creation of generous green spaces, also for public use, with an integrated children’s playground. The “Gartenstadt” is rounded off by the “Kükennest” day-care centre, which opened at the beginning of September 2020 and is run by the DRK-Kreisverband Leipzig-Land e.V.

With the investment in the direct catchment area of Leipzig, ARCADIA Investment Group is responding to the high demand for housing in Leipzig and the surrounding area. “We are pleased to add an attractive residential quarter to the Taucha location with this new project development,” explains Alexander Folz, Managing Partner of ARCADIA. “The planned neighbourhood development not only helps to relieve the Leipzig housing market, but also contributes to the urban development of Taucha and strengthens the social infrastructure of the town.” The development of the site closes the construction gap in the heart of the Parthestadt and revitalises the eastern part of the city.

Taucha currently has a population of around 16,000 and is about 20 minutes by car from Leipzig city centre. Particularly due to the BMW, Porsche, DHL and DB Schenker locations in the immediate vicinity and the optimal transport connections with the S-Bahn and tram, living space in Taucha is very much in demand. Taucha currently has two primary schools, a secondary school, a grammar school and ten day-care centres for children and offers numerous medical facilities as well as various cultural and leisure activities.

The Süß group of companies has been active on the market for over 30 years, both regionally and nationally. The name Süß stands for quality, reliability, and experience in a wide range of tasks. The core business of the company includes consulting, planning and execution of construction projects. The same applies to the areas of logistics, building materials trade and processing as well as commercial and residential project development. In addition to the above-mentioned areas, the company is also active in the service and tourism sectors. The Süß group of companies has grown steadily in recent years and now employs around 100 people.