With 6.5 horsepower and all-round protection at the start: Suitable for the runaway development of the real estate market there was a trade race at the Sax go-cart track in Dölzig which was organised by Leipzig project developer, ARCADIA Investment GmbH 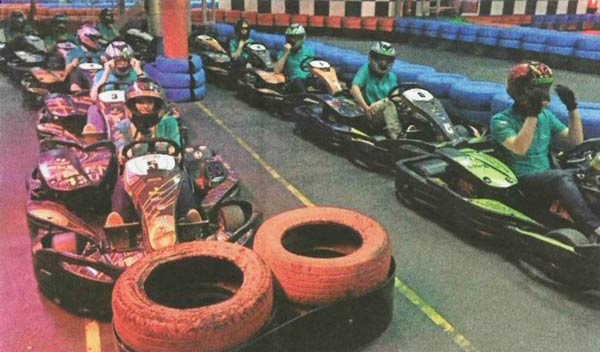 The highest priority was the safety of all the drivers at the first „Kart Racing Cup” of Leipzig project developer, ARCADIA Investment GmbH. 130 guests from the real estate market accepted Alexander Folz’s invitation to Dölzig. Many rounds were driven on the Sax go-kart track. Everything belonging to a real race was there – from crash helmets to time trials right up to qualifying in knock-out systems. In the final stages it was Luis Krumbach (ImmVest Wolf), Chris Poschmann (Reum & Schwarze) and Andreas Albrecht (ARCADIA) with bottles of champagne on the victory stand. The glass trophy for the fastest female wheels of the evening was awarded to Kathleen Haubold (ARCADIA). Also taking part: Architects such as Romy Fuchs (RKW) or the brothers Tom and Ulrich Kalkof, Managers of Hochtief, Papenburg, Züblin or Thomas Süss (Tiefbauspezialist Süss Bau) and Arndt Kübler (Begetter of the new TRIAS building on the city ring). International ARCADIA partners such as Edwin van Emmerik (Netherlands) or Bettina and Karsten Rumpf (Canada) also attended the event.