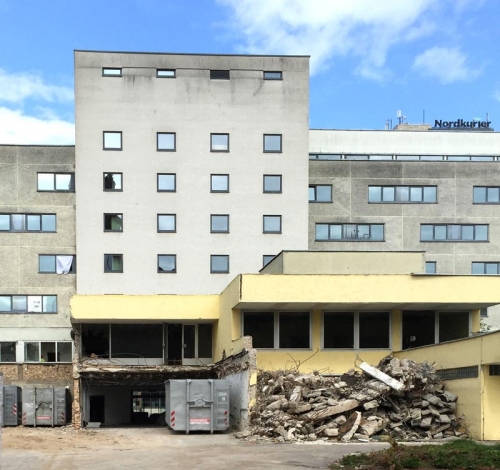 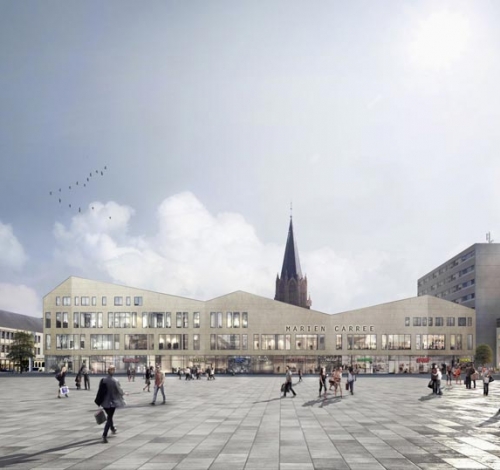 Instead of the Radisson Blu Hotel, the future Marien-Carrée will be created on 1 Treptower Straße in Neubrandenburg.Source: ARCADIA Investment GmbH

The Hamburg Achim Griese Treuhandgesellschaft mbH and the Leipzig ARCADIA Investment GmbH have started the gutting and demolition work on the Radisson Blu Hotel on 1 Treptower Straße in the Neubrandenburg inner city on Wednesday, 6 July 2016. With the Marien-Carrée shopping centre the project partners are developing round 7,000 m² area into new building segments measuring a total of round 21,000 m². Approximately 8,500 m² of this is available as retail spaces. The health and beauty retailer, dm-Drogeriemarkt, has recently secured a sales area of about 850 m² for itself. More contracts with prestigious retailers are pending according to the project partners.

According to the plans of the Hamburg architect’s office, Kunst + Herbert, high quality retail spaces with a total of 11 shop units and more than 100 meters of display window frontages will be erected in the Marien-Carrée in the best location in the city on the market square. This project, expected to be completed by the 1st quarter of 2018, will be aligned towards an array of nationally and internationally successful retailers. At the far end of the property a car park will be erected as well a large grocery store.

The firm Hagedorn from Gütersloh, a specialist well-known throughout Germany, has been contracted for the demolition work. Once the construction site fence was recently completed, the internal demolition work began last Wednesday as well as the tearing down of the flat structure at the back. After the existing building is gutted, which is expected to take about 4 to 6 weeks, the approximately six-week demolition process on the former hotel will follow. Already prior to this, the project partners gave the entire hotel inventory to interested Neubrandenburg residents in a much-noticed campaign. After the demolition, the construction pit will be implemented and some no-longer-needed cellar areas are to be back-filled. The archaeological inspection at the far end of the property, where the grocery store will be erected, begins shortly afterwards. The relocation of two transformer stations, which was a prerequisite for the demolition work, has already taken place. These will henceforth be found in the underground garage beneath the market square.

Achim Griese Treuhandgesellschaft mbH is an owner-managed property developer, which has implemented more than 140 real estate projects with a total project volume of over 2.1 billion euro since 1982. More than 100 of these projects were placed at the classic institutional investors, most of which took over numerous projects in succession. In doing so the focus was placed on retail property, however also residential, mixed-use and special use properties fall within the repertoire of the Hamburg developer. Particularly in the eastern part of Germany Achim Griese Treuhandgesellschaft mbH has successfully implemented many projects.

ARCADIA Investment Group has focused its specialisation on the development of property used for retail and residential properties as well as car parks and underground car parks throughout the entire Germany. In addition to activities relating to its own portfolio, it has also implemented a host of projects in the framework of joint ventures – amongst others in close collaboration with international companies. One of the company’s core business functions is the optimisation, maintenance and expansion of the property portfolio of family businesses with the utmost care and confidentiality. The ARCADIA Investment Group currently employs seventeen people and is developing areas with a magnitude of more than 100,000 square meters. The accompanying project volume amounts to round 95 million euro.