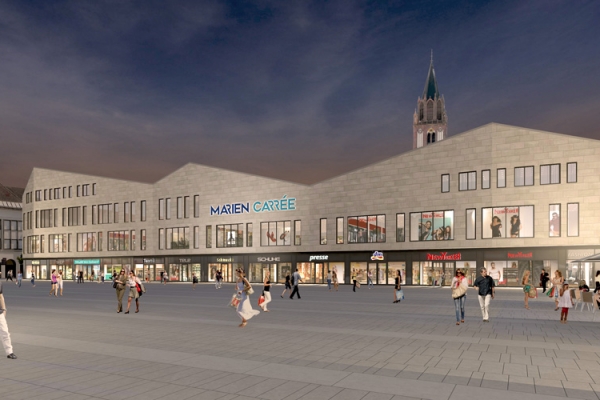 Rendering of the Marien-Carrée at 1 Treptower Straße in NeubrandenburgPhoto: ARCADIA Investment Group

The Hamburg company Achim Griese Treuhandgesellschaft mbH and ARCADIA Investment Group from Leipzig have let more than 1,100 m² of retail space in their Marien-Carrée development project at 1 Treptower Straße in the inner city of Neubrandenburg. The young fashion retailer, New Yorker, secured an area for itself spreading two levels on the ground floor and also the first floor. Alongside dm-Drogeriemarkt, New Yorker is therewith the second large anchor tenant in Marien-Carrée, which comprises several building sections with a total rental space of some 17,800 m² on an approximately 7,000 m² property. The opening of the new New Yorker shop is planned for the end of 2018.

Aproximately 7,800 m² is available for the retail trade in Marien-Carrée – some of which are spread over two levels. The centre serves to fill the gap between the ECE Markplatz Centre and Turmstraße with high-end retail areas with shop fronts stretching more than 100 meters in the city’s very best location. A huge grocery store and a car park as well as additional shop areas are to be implemented on the southern part of the property.

With more than 1 000 outlets in 40 countries New Yorker is one of the largest fashion houses operating in Europe. Since the opening of its first outlet in the north-German city Flensburg in 1971, New Yorker has been on a continuous path of growth. Through carefully selected investments in the future the company was able to develop into a global clothing enterprise. Today the New Yorker team consists of more than 16,000 full-time and part-time employees. In the past few years New Yorker has shown a strong growth rate and has been able to continually increase its profitability, despite the general trend.

Achim Griese Treuhandgesellschaft mbH is an owner-managed property developer, which has implemented more than 140 real estate projects with a total project volume of over 2.1 billion euro since 1982. More than 100 of these projects were with classic institutional investors, most of which took over numerous projects in succession. In doing so the focus was placed on retail property, however also residential, mixed-use and special use properties fall within the repertoire of the Hamburg developer. Particularly in the eastern part of Germany Achim Griese Treuhandgesellschaft mbH has successfully implemented many projects.

ARCADIA Investment Group has focused its specialisation on the development of property used for retail and residential properties as well as car parks and underground car parks throughout the entire Germany. In addition to activities relating to its own portfolio, it has also implemented a host of projects in the framework of joint ventures – amongst others in close collaboration with numerous national and international companies. One of the company’s core business functions is also the optimisation, maintenance and expansion of the property portfolio of family businesses with the utmost care and confidentiality. The ARCADIA Investment Group currently employs 20 people and is developing areas with a magnitude of more than 180,000 square meters. The accompanying project volume amounts to round 150 million euro.

For enquiries please contact Herr Ralf Bettges, Press and Public Office at 0172 – 233 73 90 Further information about ARCADIA Investment Group can be found at www.arcadia-invest.de.